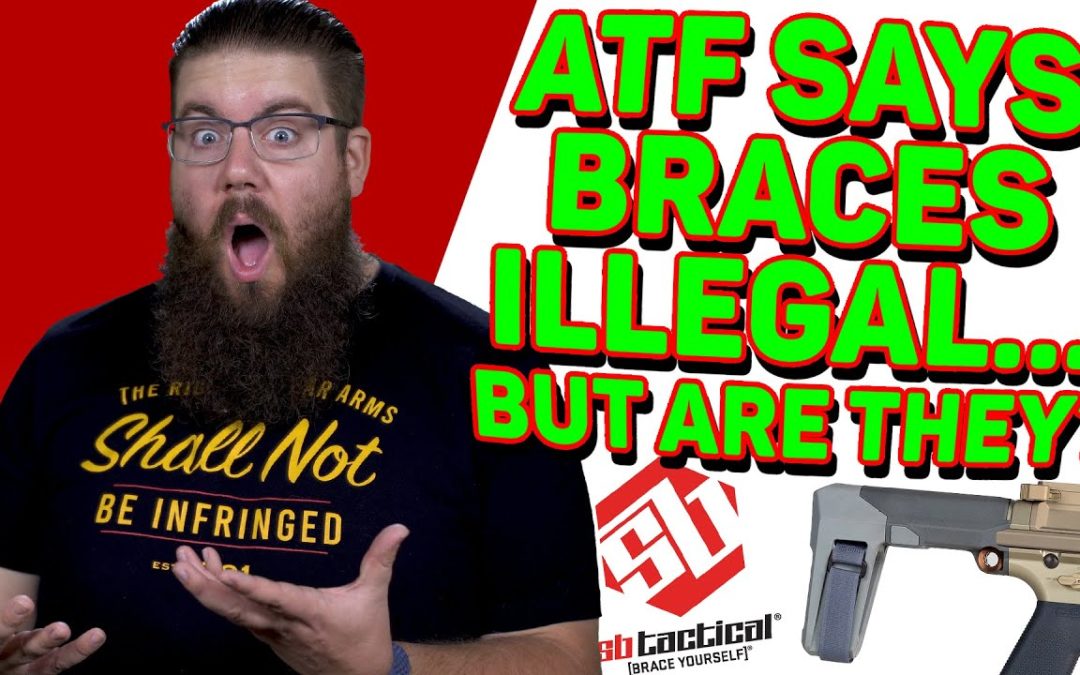 OH BOY. ATF, once again, for The Who knows how many times, is at it, again. Did I mention they do this crap a lot? In a recent criminal determination letter ATF made some pretty bold claims about the SB Tactical braces and how they are, according to ATF, knowingly selling something that wasn’t approved and therefore turning millions into criminals. The problem with that? I’m not sure its true. We’re going to break it all down, after this.

Welcome back to the gun collective, my name is Jon Patton and you are watching the fight for gun rights. I know there are a ton of people freaking out about this in a bunch of different ways so I’m going to try to come at it as level headed as possible for you guys. Sure we want to get clicks on our content, but we are not out to say the sky is falling. That being said, let’s wade through this and see if we can come to a reasonable conclusion shall we?

In a recent article on Ammoland.com, thanks to a FOIA or freedom of information act request, a 2018 letter from ATF to SB Tactical was shared. Let’s start there. That letter says that certain products currently marketed and sold by SB Tactical have not been evaluated or approved by ATF and that SB Tactical was marketing all of their braces as evaluated and approved although in most cases no evaluations or classification have ever occurred. They then showed a couple images from the boxes of SB Tactical products that said ATF Compliant and ATF has review this product and blah blah blah.

So it seems this is really a complaint about marketing and not an official determination.
The letter goes on to say ATF has only evaluated 2 SB Tactical submissions and that they were both approved as stabilizing braces and classified them as not designed or intended to be used as shouldering devices. They then went on to say that 23 different braces were not submitted nor approved by ATF and that SB Tactical must cease false advertisement etc etc.

So all that to say that ATF didn’t like that the marketing being used. Not only that but adding to the confusion is the fact that ATF did in fact evaluate at least a couple of the braces listed and cited they were not in fact illegal in a criminal determination from 2017. For what its worth, my understanding is that criminal determination letters are intended to provide a given prosecutor with an answer on whether or not a given product is legal or illegal.

Also in this letter is a line that says ATF does not approve stabilizing braces which are similar or based off shoulder stock designs. Thats hilarious because literally every single brace could be argued as similar or based off the design but one is a stock and one is a brace. Including the ones that ATF has already approved at this point.

Look at the MPX PSB vs the MPX stock for example. The only difference is the brace.
In regards to the first claim, I spoke with SB Tactical about this and I’m told that they changed their marketing at least a couple times now to deal with accusations like this from the ATF. So basically we land at ATF says hey you shouldn’t be saying this, SB Tactical says okay sure and changes things, and then we go about our lives. Again, this was back in 2018.

Fast forward to 2020, the year of lunacy, and the plot thickens. In a different criminal determination letter involving a suspected short barreled shotgun, the ATF decided to paint a very interesting picture. Skipping the introductory fluff, on page 4 ATF states that the SBA3 has been previously and repetitively determined to be a shouldering device and not a stabilizing brace. HOLY SHIT thats news to me. You would think that a product that has been on the market for over 2 years with that type of determination would have had some issues along the way, right?
On the next page things get a little more spicy. They reference the original 2018 letter stating that they don’t approve braces that are similar or based off of shoulder stock designs. Except they did that already so thats a straight up lie.

They go on to say Since the date of this notification, SB Tactical has continued to market these accessories as ATF compliant pistol stabilizing braces. Although ATF has made a consistent effort to inform SB Tactical that they are perpetuating a false narrative regarding these accessories they market, SB Tactical has taken the position that ATD has no authority to regular an accessory manufacturer. So they aren’t allowed to think that? I mean, ATF is a complete waste of tax payer dollars so I mean, if that is what they think, I would go ahead and agree with them on that. I didn’t realize that opinions were a crime in this country. They continued with This has essentially left SB Tactical business partners in the position where they are unknowingly manufacturing and marketing unregistered NFA firearms. HOLY SHIT AGAIN. I have to comment here.

Hey ATF, if they’ve been doing this for years, and you claim that they have been, why haven’t you done anything about it? If there are supposedly a substantial number of unregistered NFA firearms out there, where the heck have you been when it comes to enforcing the law? Is it because that is a straight up lie again? I mean, wouldn’t it be prudent to do your job if such a substantial issue was present? Not only that but where are the hundreds of cease and desist letters telling retailers and manufacturers to stop selling this supposed product that when included makes an unregistered NFA firearm? Why is this just now coming to light in a criminal determination letter? Is it because this is total BS? Hmmm?

They kept going. In February of 2019, SB Tactical was made aware, through outside sources, that ATF determined in a criminal examination that the SBA3 accessory is a shouldering device and not a stabilizing brace. Well actually that particular case involved a modified brace that had a magazine shoved into the middle of it and was only a determination about that individual case and not the product as a whole but sure, continue spreading lies. ATF then stated that although SB Tactical is aware of this determination, is has continued to attempt to flood the market with the SBA3 accessory, misleading its business partners that the attachment of the accessory will not change the classification of a firearm. Again, where’s the determination letter specific to this product? According to SB Tactical, they have been waiting over 2 years for a final determination letter and have yet to receive one.

Let’s rewind a second, they said that SB was made aware though outside sources. If this determination was made, why is ATF not notifying the manufacturer of such a big issue? Not only that but I have to reiterate, if this has been happening for 2 years, why has ATF made no issue to put a stop to it? The fact that they are putting blame on SB Tactical for something like that seems to be a straight up attack on the company. Not only that but this is all predicated on what the ATF says being true, and at this point I’m confident that its just not.

It seems to me that the ATF has taken it upon themselves to make baseless claims about a manufacturer in a letter intended to assist in a criminal case which is entirely inappropriate behavior and falls right in line with their consistent rogue behavior we’ve covered before. As far as I’m concerned this is harassment of SB Tactical, the gun industry AND the American gun owner as a whole at this point. Waving this arbitrary wand around claiming things are illegal and have been for years without concern for the repercussions of such statements is dangerous and quite frankly a load of horse shit.

I want to know what you guys are thinking here. Was ATF acting correctly? Did I get this wrong? Is the ATF out to get gun owners or SB Tactical? Sound off in the comments below and let’s talk about it. I’m really curious to know whats on your mind about this.

If you guys enjoyed this break down and you found it helpful, please do me a favor and hit the like button to let the algorithm know and of course if you want to see more gun news every week, please get subscribed and hit the notification button, thats super helpful as well and as always, thank you all for watching, we’ll see you soon.