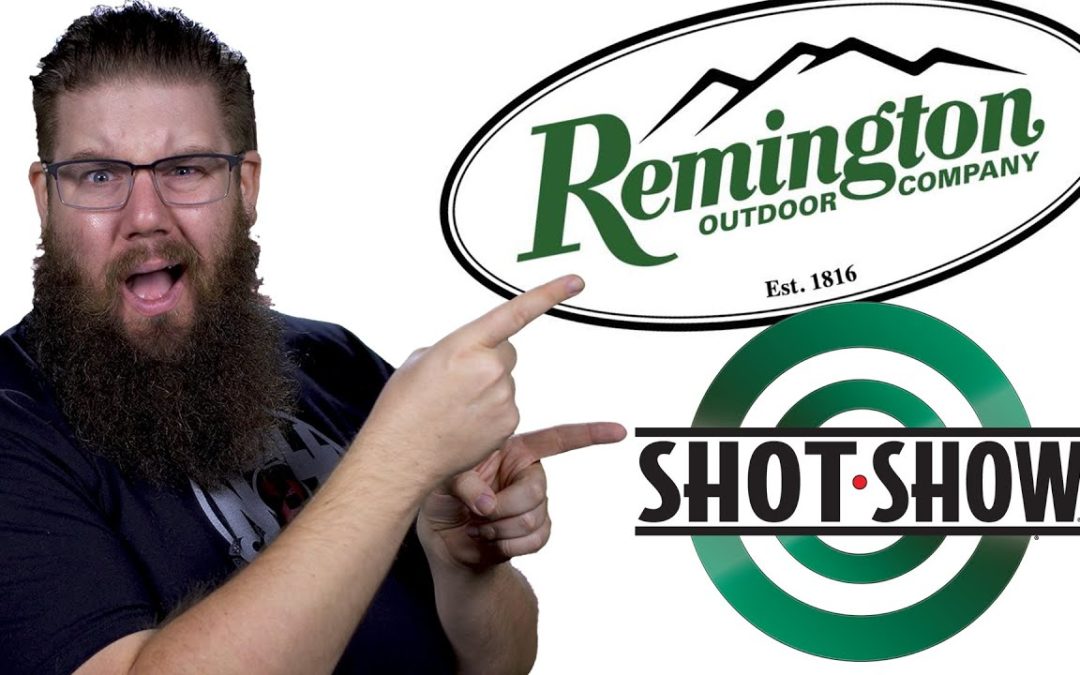 This week on TGC News, New guns from Savage, Sig and Henry, Kimber is moving, Full Conceal is bankrupt, Remington under investigation and SHOT is canceled!

Welcome back to another episode of TGC News, the only gun news show that covers things you actually care about, my name is Jon Patton.
We have a bunch of stuff to cover this week, so let’s get into it.
First up, Savage has release 3 new shotguns under their Stevens brand. For those unaware, the Stevens line has always been on the more affordable end of things. Essentially we have 3 different configurations of the Stevens 320 pump action with a thumbhole stock. They fall under 3 different types. The Security model with a bead front sight or the security model with ghost ring sights. Both of those have an 18.5 inch barrel, 3 inch chamber, 5 round capacity, and of course, the goofy looking thumbhole stock. There’s also the turkey version which has a 22 inch vent rib barrel with fiber optic sights, 3 inch chamber, extended extra full turkey choke and a OD green version of the same furniture.
I suspect the reason for the thumbhole on both of these models is 2 fold. Its good for folks that prefer a pistol grip AND at the same time it potentially works in places where pistol grips arent okay. Thats speculation of course but the real important thing here is the value. The MSRP on the security models is 275 for the bead sight and 305 for the ghost rings. The turkey model lands at 323 MSRP. Now I dunno about you but a decent budget shotgun sounds appetizing to me. What do you guys think? Shotguns are not always the best home defense solution but it could be a cheap option to have around. Not only that but hunting with a pump gun has a special level of fun added to it right? Sound off in the comments and lets talk about it!
And we have 3 more new guns so I’m gonna blast through these quickly. Sauer the JP & Sohn kind, not to be confused with Sig Sauer, has release a new bolt action under their S404 line call the Synchro XTC line up in green camo. These are unique because they come with a super fancy carbon fiber stock. This particular one comes with a green camo that appears as though it might be part of the carbon weave which is rad. But along with the ultra fancy stock and barreled action comes a hefty price tag. This one goes for 8199 bucks.
Next up, Sig Sauer has released another new custom shop series. Also shout out to sig for learning how to get worse in video quality over the last video pistol release videos they’ve done. Anyway the new custom shop guns are a limited edition release of the old equinox line up. Long story short, the 226 and 229 versions of the gun have been coated black and had the side slabs machined for a nice 2 tone look and then all the small parts like the slide release, decocker and trigger have all been nickel plated. The grip is a G10 variant which replaces the really nice wood grip on the old model. This was done to improve grip. It also comes with 2 mags, their Xray 3 day/night sights, the short reset trigger and a fancy locking case. And as per usual, they don’t list a price anywhere so because I’m annoyed at them for that, this gun is set to retail at 50 billion dollars. The most expensive handgun ever made. LOL how about that Sig?
Also in new gun news is a really cool one from Henry. Its called the New Original BT Henry 200th anniversary edition. The inventor of the Henry lever action, Benjamin Tyler Henry would be turning 200 in 2021 and this is a commemorative gun for that. Its got a 24.5 inch octagonal barrel thats got a polished blued finish, a fancy walnut stock and of course this really nice engraving on the sides of the receiver. The guns will be chambered in 44-40 WCF and there will only be 200 made. That being said, there is a price to go with them of 4289 dollars and I suspect that will only go up over time.
I’m curious to know what you guys think of collector guns like this. Do they get you pumped or do you just pass them by because of the price? Sound off below so I can see what you guys are thinking on this one!

It’s time now for a mountain of gun industry or gundustry news! You know what, we’ve never had enough industry news to do this but izzy fire it up. Its rapid fire time. Let’s kick it off with some positivity. Ruger has released their Q3 earnings report and its a doozy. Sales came in at 145.7 million which compared to last year’s 95 million is a 53 percent increase! That is flat out HUGE. Looking at their yearly total thus far, it was 399.6 million versus 2019’s 305.4 million. A 23.5 percent jump over last year. Outstanding news for Ruger for sure.
Now, let’s go the complete opposite direction. Remington is BACK in the news. It seems the split of all the brands didn’t go as cleanly as possible. According to a recent article on TheTruthAboutGuns, sources close to the deal say that Remingtons CEO Ken D’Arcy was behind the company called Roundhill Group that bought Remingtons firearm business. If you remember back to when we covered that story originally, I couldn’t find anything on that company at all besides this guy named Jeff Edwards being tied to it. Well apparently that was just a front and Darcy was behind it the entire time. Seems kind of shady to me to purchase the company that you helped run into the ground as a way to escape bankruptcy but I’m not a financial expert and that may be a thing thats totally fine. Not only that but apparently when Remington decided to shut down the Ilion new york plant, they also decided to deny pensions, cut off health care and deny severance pay EVEN THOUGH that was contractually obligated. That being said, the national labor relations board is now involved and there is said to be an investigation coming. Shady stuff abound and we will keep an eye on this as it moves forward.
Moving right along, everyones favorie folding Glock company Full Conceal has announced that they plan to make a folding version of the barret m82A1. LOL just kidding their bankrupt. During the highest gun sales in the history of everything, they managed to go bankrupt. Speaks volumes to the validity of a product that makes no sense.
Also in industry news, Kimber is moving from New York state, to a place called Troy Alabama. Its really nice to see gun companies pulling out of anti gun places.
And last but definitely not least, SHOT show is canceled! Its as if they watched TGC news last week and were inspired to make the call. Long story short, they cited COVID restrictions for the reasoning behind the decision. I know this had to be a HUGE decision to make with so many people and moving pieces involved but the show has been rescheduled for 2022. Some folks are calling them sissies or cowards for canceling I want those people to know that the NSSF had zero choice in the matter and that you need to be mad at the government of nevada if you want to be upset.
That being said, If you are a brand that was planning to release something new during that time, you might be scrambling right now, CALL ME. Seriously. We have an alternate plan that I know you will like. Whew, that was a ton to cover, let’s take a breath.

It’s time for more Friendly Fire, the segment where I answer questions from you guys! This time our questions are coming from our loyal subscribestar crew! Hit the link in the description to check that out. First, Rusty In Oregon says should I efile to SBR all my guns with pistol braces just to make the whole argument go away? ABSOLUTELY NOT. That is exactly what they want. Your money and your compliance with illegal regulatory behavior. FUCK that. Stand your ground. Ghost says do you think current ammo prices will be the new normal is democrats win the election? Its hard to say for sure but prices certainly will NOT go down until the demand slides back for a while. And with the real threats that these politicians pose to the second, I don’t see demand falling down ever. Someone needs to find out if they all have stock in gun companies and just want the boost LOL. Paul Ehlen says if the rioting and looting doesnt stop will militias step in and squelch the unrest? I think that’s a dangerous proposition and is likely to be seen as an insurrection rather than an attempt for peace. I think its more likely the national guard will step in but at this rate I just expect everything to be burnt to the ground by spring.
My friendly fire question to you guys this week is one i’m stealing from William Moonan, Do you think the cancelation of SHOT show is going to be negative, positive or have no effect on the gun industry? I always answer questions like this, its your turn! This will be fun. Drop your thoughts in the comments below and If you want to ask a friendly fire question, jump over to Subscribestar and support us directly on there!
After you click the like button, be sure to hit the secret affiliate link down in the description, that would be a massive help for us and of course don’t forget to get subscribed for more gun news every week and as always, thank you all for watching, we’ll see you soon!

This time on TGC News, Jon Patton talks about New guns from Savage, Sig and Henry, Kimber is moving, Full Conceal is bankrupt, Remington under investigation and SHOT is canceled!

Business Inquires: info@pattonmediaconsulting.com ©Patton Media and Consulting, LLC 2018 The materials available through The Gun Collective (including any show, episode, guest appearance, etc. appearing within) are for informational and entertainment purposes only. The opinions expressed through this video are the opinions of the individual author. — Affiliate disclaimer: The Amazon and TGC Gear links above are affiliate links! — They generate a VERY small sales commission percentage if someone is kind enough to click through and purchase something. Our Affiliate links are associated with the Amazon affiliate program and TGC is an amazon associate. #NeoMag #KineticDevelopmentGroup #ShotShow