ATF vs PISTOL BRACES – What We Know So Far! 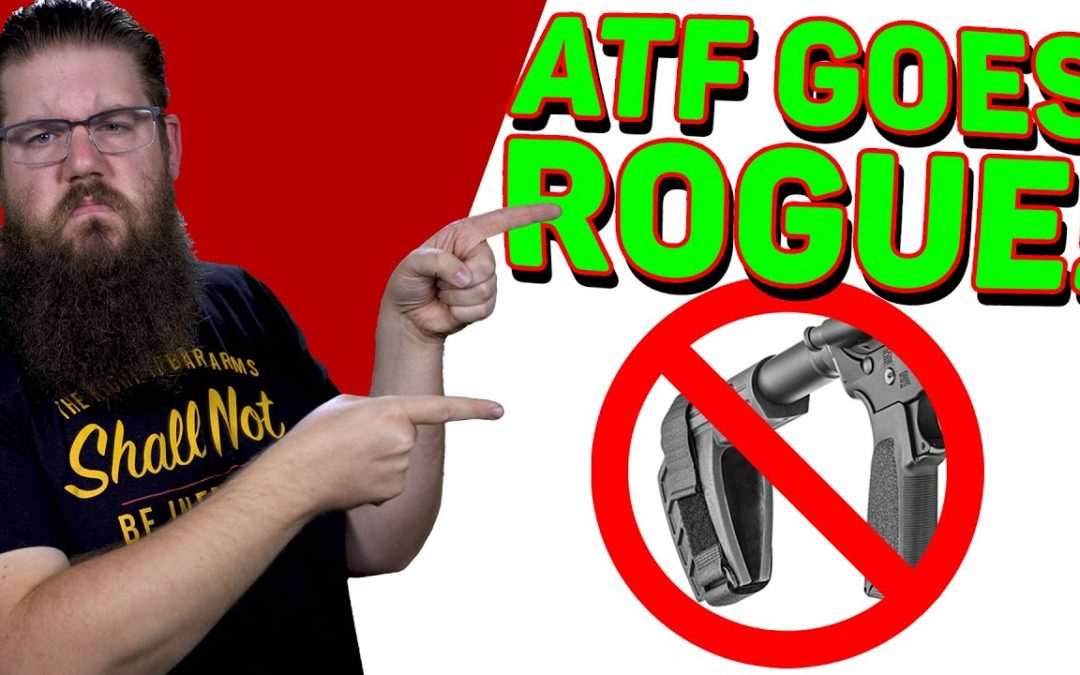 The ATF is at it again and this time, people in power are noticing. Secret cease and desist letters, Congressional letters of concern, high profile law office letters and more. Shenanigans abound. We’re going to break it all down, after this.

USE CODE ‘TGC’ AT VERTX.COM FOR 25% OFF!
Welcome back to The Gun Collective. My name is Jon Patton. It seems as though the ATF has continued their nonsensical tactics to suppress the gun industry. Let me explain. There is a lot to unpack here so stick with me. On September 30th, Representative Matt Gaetz out of Florida released a letter, addressed to the US Attorney General William Barr and the Acting Director of the ATF, Regina Lombardo, that explains a bit about what has been happening. While the letter, signed by 4 different members of congress, does give some positivity to the Department of Justice, the branch that oversees ATF, by noting their efforts to ensure that Americans have fair notice of their obligations, it does get pretty spicy. I’ll read an excerpt.

It has come to our attention that ATF has decide to pursue, in secret, a “workaround” to DOJ’s countermeasures that is hostile to citizens’ Second Amendment rights and to due process. Blocked from pursuing its rogue agenda through civil enforcement letters, it appears that ATF is not exploiting its criminal enforcement powers to threaten small business owners around the country into complying with made-up and shifting criteria for determining the difference between a pistol and a short barreled rifle. Furthermore, despite claiming that the classification process is voluntary, ATF has begun strong arming companies into submitting brace affixed firearms for classification.

Basically, what this says to me is that some folks at ATF are trying to sneak around and based on whims constructed of thin air, attack gun companies through their criminal side as opposed to the civil side of things. This is extremely worrying. They are so far out of line with tactics like this and it seems the letter agrees
These in terrorem aka terroristic tactics cannot be allowed to proceed. As we have previously stressed, the use of unpublished or non-existent criteria in ATF enforcement efforts is repugnant to the rule of law.

HALLELUJAH. These are members of congress saying this guys. The ATF is WAY out of line.
It continues. Atf’s decision to shift from civil to criminal enforcement only exacerbates this problem as it threatens law abiding citizens with criminal penalties despite the absence of any advanced warning. This is particularly troubling where, as here, enforcement trenches on these citizens fundamental second amendment rights.
Let’s bask for a moment in getting acknowledgement from congress that gun parts issues fall under the second amendment. Let’s also understand that this is a big freaking deal.

The letter continues telling ATF to cease abusing its enforcement authority by threatening law abiding small business owners and the now estimated 3-4 million Americans who own firearms equipped with arm braces. It goes on to say these are widely used and big among veterans and that this action by ATF is shameful.
This letter is massive. Its basically several members of congress going what the fuck is happening over at ATF. This is the kind of stuff gun owners NEED from our elected officials. Proper representation. Okay, so ATF is way out of line and doing shady stuff. But this isnt the entire story.

One of the companies that got one of the unfounded cease and desist letters was Q, makers of the Honey Badger. Essentially, they have published the letter from ATF that says in longer terms that the arm braced guns they are selling are actually NFA items, specifically SBR’s and are intended to be fired from the shoulder. So now the ATF is determining intent based on thin air. They are pointing to the marketing used to sell these guns as a basis for this nonsense they are pushing. They also threatened Q with legal action if they don’t do as they’re told. What Q has said in their response is for customers to remove the upper of these guns and separate them from their possession and register the gun under a form 1 under NFA laws.

At the same time Q has hired a high profile law firm to send a letter on their behalf and its a scorcher. Of course it starts out by saying that Q disagrees with the the conclusion that these pistols are actually SBR’s and notes that this is based on the prior classifications and law in the public domain. The letter goes deeper and there are 3 main sections in that letter that I’ll try to simplify for you guys. Section one, The letter (the cease and desist) is procedurally deficient and is not based on publicly available standards. Basically this section indicates that the FATD, the firearm and ammunition technology division of ATF has previously said braced guns are definitely NOT SBR’s and that they are basing this cease and desist on nothing. It also states that the fact that they can’t cite a legal standard brings serious concerns about its lawfulness. It also brings into question the letter’s threats about criminal prosecution without adequate notice. Again questioning the lawfulness of this stuff. They cite that the Supreme Court has held that due process bars enforcement of criminal statutes where an agency improperly changes course and that an abrupt regulatory change makes it impossible for a person of ordinary intelligence to know what is prohibited. They also noted that ATF has refused to provide any indication of how the honey badger can be reconfigured so that ATF would no longer consider it an SBR and has instead tasked Q with the correction of this issue.

The next section of this spicy letter says that Q has in fact ceased manufacture of the honey badger pistol and proposes that ATF declare its determination non-retroactive so that an appropriate replacement brace can be sent out. In this section they state that Q doesn’t have the financial means to send out 16 inch replacement barrels to everyone with an affected gun and that such a thing would push the company into bankruptcy. Which is likely what the ATF wanted in the first place. Not only that but the request for a non-retroactive application of this change is based on the fact that neither Q or the customers believed the pistols to be NFA items, likely because they aren’t, and that the Honey Badger pistol is not and has never been designed to fire from the shoulder.
The final section basically just covers the fact that Q submitted its other guns, the sugar weasel and mini fix to FATD for official classification.

WHEW! Okay, so that was a giant middle finger to ATF and basically calls them out on being unlawful and if you ask me, flat out criminal in their actions.
SB Tactical, the company that started the whole brace craze, also made a statement. SB Tactical, in conjunction with the Firearms Regulatory Accountability Coalition, Inc., (FRAC), and the National Rifle Association, stands in solidarity with Q, LLC. and is disappointed by the recent ATF actions in classifying their Honey Badger pistol as a short-barreled rifle. This classification is based on a seemingly arbitrary set of criteria and promises to create unnecessary confusion and anxiety amongst millions of legal gun owners and the industry as a whole.

The ATF is saying, in part, that they will not evaluate an accessory as a stand-alone product, but that the characteristics of the entire firearm influence their decision. Characteristics such as optics chosen, magazine capacity, how the gun is marketed, or length of pull will “holistically” determine a firearm’s NFA classification. Moreover, the ATF has, to date, refused to clarify or state what characteristics define a Pistol Stabilizing Brace. They have stated that “they will know it when they see it”.
This arbitrary approach is creating confusion and uncertainty for millions of law-abiding citizens, manufacturers, retailers, and wholesalers. SB Tactical is the inventor of the Pistol Stabilizing Brace and is deeply committed to our customers, the Second Amendment, and the rule of law. The ATF’s approach is unfair and unlawful.

Okay so lets recap. ATF is acting outside of the law and trying to threaten the gun industry with criminal action and because of this nonsense, both the gun industry and members of congress have put the DOJ, ATF and US attorney general on notice. This stuff will not stand. Now, its also important to note that these letters have a lot more teeth if there is MASSIVE public pressure behind them. That’s where you guys come in. There is a link in the description to send a letter of your own to Bill Barr and others. Show the powers that be that we will not stand for this.

Now I know that there was A LOT to digest in this video. I know. It took me some time to wrap my brain around it too. I assure you that the sky is not falling and that we can take an active role in stopping this nonsense.
We will be keeping a very close eye on this story as it develops so please if you would, hit the like button so more folks can see this and if you want to stay up to date with more gun news, get subscribed and hit the notification button as well. And as always, thank you all for watching, we’ll see you soon.

GET YOURSELF A PISTOL BRACE HERE: https://bit.ly/34zvaFA